Our programs strive to make arts accessible, meaningful, and useful to all individuals, including those unable to participate in traditional community arts programs. We’ve provided innovative therapeutic art programs to more than 50,000 people throughout Cuyahoga and neighboring counties in a variety of settings. Our programs include customized contracted services at area agencies, hospital-based programs, employee wellness programs, professional education workshops, and our pioneering Discover the Artist Within You community classes.  All of our programs have been developed around the philosophy that art making is central to healing and wellness and use the creative process of making art to improve and enhance well-being.

Vision: Art therapy is universally accepted as a proven approach to healing, wellness, and self-care that carries into everyday life.

Our core values guide how we support each other and our clients:

The Art Therapy Studio was co-founded in 1967 by art therapist Mickie McGraw and psychiatrist George Streeter. The idea for the studio developed out of Dr. Streeter’s long-time personal interest in art. Both had used art making at a young age as a way to cope with serious physical illness – he with tuberculosis and she with polio. While working at Highland View Hospital, which is now part of the MetroHealth system, Dr. Streeter approached Mickie with his idea to open an art studio in the hospital for patients. After completing her degree at the Cleveland Institute of Art, she returned to the hospital a year later ready to start.

The program, which originated in the rehabilitation department, provided services throughout MetroHealth hospital, including in the dialysis, intensive care, burn, substance abuse and oncology units. In the 1980s, the studio expanded to include community-based programs in order to provide continued services after patient discharge and to extend services to members of the community.

By the early 1990s, the studio became a freestanding nonprofit, relocating to its current Fairhill Road location. As inpatient stays shortened, the programming expanded to serve fee-for-service clients at community-based health care and social service sites.

We’ve been featured as a “Place of Note” in Crain’s Cleveland.

Check out our article in CAN Journal.

Michelle has a Masters in History with a Specialization in Museum Studies from Cleveland State University and a Certificate in Nonprofit Business Management from Case Western Reserve University. She comes to Art Therapy Studio from SPACES where she served as the Community Engagement Coordinator for six years. Much of her work has been focused on increasing access to the arts by working directly with vulnerable individuals such as incarcerated youth, LGBT seniors, children living in public housing, and homeless women and children. She is a life long resident of Northeast Ohio and currently lives in Lakewood with her partner, two cats, and rescued guinea pig. Michelle is also a member of the Cleveland Museum of Art’s Print Club and serves on the advisory committees for both Kent State University’s MuseLab and the Education and Museum Outreach Advisory Council for the Federal Reserve Bank of Cleveland, along with serving as President for the National Emerging Museum Professionals Network.

Cheryl holds a master’s degree in art therapy and counseling from Ursuline College. She is an Art Therapist (ATR) and Licensed Professional Counselor (LPC) with experience working with veterans, adults with chemical dependency issues, LGBTQ, trauma and adults with developmental disabilities.

Kiran holds a Bachelor of Arts degree in Arts Management and Entrepreneurship from Baldwin Wallace University as of May 2019. As a Northeast Ohio native, she has started preparing for her career by working with nonprofits through her Alma Mater. She has interned with Near West Theatre and Veterans Art Center of Tampa Bay. She has worked with faculty on her campus to create a bi-annual ceramics workshop for veterans of BWU, and has led Circle K International, a collegiate service organization, for 2 years. In her spare time she enjoys exploring Cleveland, road trips, and spending time with her family and friends.

Ashleigh is a recent graduate of Ursuline College’s Masters of Arts in Art Therapy and Counseling program. Ashleigh has extensive experience working with clients ranging in age from young children to seniors. She has worked with individuals that have limited mobility, clients with mental health and behavioral diagnoses, as well as medical patients.

Deborah is a graduate of Ursuline College and holds a Master of Arts in Art Therapy and Counseling. She is a registered art therapist and a certified psychiatric rehabilitation practitioner. Her 16 year career as a behavioral health specialist was spent with a county agency before joining the Art Therapy Studio in 2014. Deborah’s work focuses on serving adults with severe and persistent mental health challenges. A life-long artist, her special art skills include drawing, painting and ceramics.

Ami studied ceramics and psychology at the University of Akron where she earned her BFA. She went on to earn a master’s degree in Transpersonal Counseling and Art Therapy from Naropa University in Boulder, Colorado. She has experience working with elders and with adults living with with mental illness, traumatic brain injuries, and developmental disabilities. When she is not leading art therapy groups or making art she enjoys hiking, cooking, and reading. 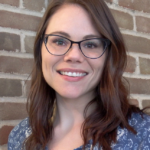 Dana received her Bachelor of Arts in Art Therapy from Capital University in 2015 and her Master of Arts in Counseling and Art Therapy from Ursuline College in 2019. She has experience working with children, adolescents, and adults in a variety of settings such as medical, psychiatric, and outpatient behavioral health. Dana enjoys empowering others to express themselves beyond verbal language through art media. In her free time, she enjoys spending time outdoors, watching The Office, spending time with loved ones, and of course…creating art!

Kim is a board certified art therapist with over 18 years of clinical experience working with physical medicine and rehabilitation patients who have sustained spinal cord injuries, strokes and traumatic brain injuries. Kim also provides art therapy services to skilled level medical patients and in-patient psychiatric individuals. She facilitates community art classes, has presented various continuing education workshops, and provides art therapy services through her private practice. Kim focuses on building strengths and using the creative process to assist with planning, problem solving and personal expression as a means for healing and growth.

Matthew is a graduate of Ursuline College where he earned his Masters degree in Counseling and Art Therapy. His educations background also includes a Bachelors in Psychology and a master’s degree in School Counseling from Kent State University. Matthew has experience working with children in the the school setting and the elderly population, in addition to working with adults with mood disorders. When he is not researching new art techniques or leading his art therapy groups, he enjoys playing guitar and spending time with his family.

Briannia received her Bachelor’s of Fine Arts with a focus in printmaking from Ursuline College. She returned to Ursuline College in 2016 to obtain her master’s degree in counseling and art therapy. Since 2017, she has been at the Art Therapy Studio working with various populations, including; older adults, adults recovering form substance use and mental illness, and adults with cerebral palsy. In her spare time, Briannia enjoys traveling, reading and spending time with her family.

Amber is an Art Therapist, Licensed Professional Counselor, and fine artist. She holds a master’s degree in art therapy and has experience working with adults with intellectual disabilities as well as adults with cerebral palsy, Down syndrome, autism, dementia, and Alzheimer’s disease. Although she has been working primarily in medical art therapy, she is experienced in art psychotherapy and treating individuals with mental illness. Amber has presented lectures on art therapy as well as her own autobiographical assemblages.

Anastasia studied Sociology and Philosophy at John Carroll University in University Heights, Ohio where she earned her Bachelor of Arts. She went on to pursue art classes at Cuyahoga Community College and her master’s degree in Counseling and Art Therapy at Ursuline College in Pepper Pike, OH. Anastasia has experience working with children, adolescents, and adults facing mental illness and co-occurring disorders as well as elderly adults with dementia. In her limited free time she enjoys being outdoors and making art.

Rosalia is a board certified art therapist with nearly 20 years of experience. After obtaining her master’s degree in art therapy from Ursuline College, she worked in many settings ranging from residential treatment to volunteering with orphan children in Russia.  Since 2006, she has worked at the Art Therapy Studio in various settings and has experience working with individuals in long-term spinal cord injury care, psychiatry, Dementia, and pediatric outpatient and oncology.

Molly is an Art Therapist and a Marriage and Family Therapist-Supervisor. She is a graduate of Antioch University Seattle’s Master of Arts in Psychology program with a dual specialization in Art Therapy and Couple and Family Therapy. Molly’s clinical work has focused on treating individuals and families healing from trauma, people with mood disorders, and partners seeking couples therapy. In addition to working with Art Therapy Studio, Molly also provides Art Therapy and mental health services through her private practice. In her free time, Molly enjoys spending time with her family, vegetable gardening, hiking and camping/backpacking.

The Art Therapy Studio is governed by a Board of Trustees.

Read our Annual Report for financial information as well as a list of donors and volunteers.